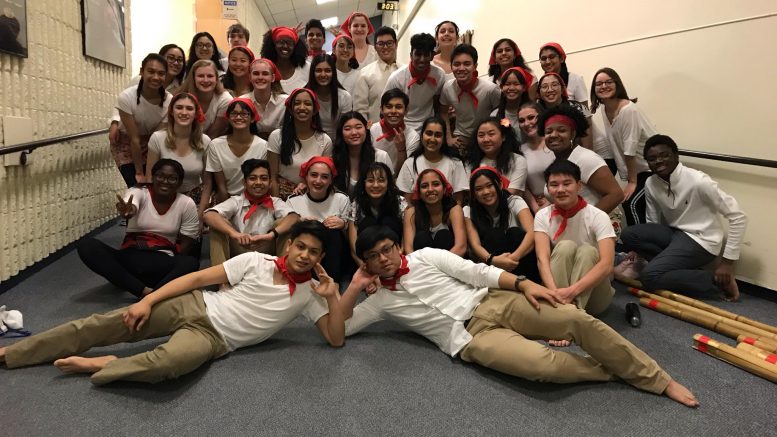 Filipino dance grinning after a successful weekend of performances.

This past weekend, Asian Students in America held their annual Lunar New Year show. Similar to last year, the show had issues leading up to the performance. After school on Tuesday, the campus shut down at 5:30 PM, which threw a huge obstacle in the way of ASIA’s tech week schedule. Thankfully, ASIA chose to begin their tech week on Sunday night leading up to the week, so they still had enough practice to pull off the show. Then students were hit with the news that they’d undergo a weather quarantine all of Wednesday, further complicating ASIA’s tech week schedule. Finally, on Thursday, the building opened for six hours for a “Lunar Freeze In” where they discovered that the sound and lighting booth had flooded. They had time to run the show twice. On Friday night, IMSA campus came together to admire every minute of hard work that had paid off.

I’ve seen five IMSA Lunar New Year shows in my life. I looked forward to going to them before becoming an IMSA student myself, and I looked forward to participating in them when I became a student. Every year I’ve seen an IMSA Lunar New Year, I’ve loved it even more than the last. They seem to improve as years go on. Students become more passionate and talented. Choreographers find new inspiration. Scriptwriters produce new ideas. ASIA somehow does even better than the years before.

This year, every scene in the script was perfect. From Leon Li (’19) crashing a toy car to Kanika Leang (’19) yelling at her Little Prince, every actor put their entire heart into their lines. Janna Jann (’20) and Joanna Lee (’20), ASIA’s Lunar Co-Chairs, wrote the script. Using a new concept, adapting the script from a traditional story, they wrote an endearing script to explain the confusion that accompanies living on the hyphen as an Asian-American.

Each act cleaned themselves close to perfection, and throughout the entire show, the students cheered on their friends. The individual acts, notably Original Beige and the Yo-Yo-ers, pulled off amazing performances after months of practicing on their own schedules. Class dances put on the best routines that I’ve seen in years, and the traditional dances were synchronized to perfection. Every piece of the show truly left me in awe.

Still, after three years of participating in IMSA’s culture show, the performance itself will never be as important as the community which puts it together. I can’t imagine a community better than IMSA’s to pull off a show despite every disaster thrown at us.

As ASIA president, Catherine Luo (’19) said in a Facebook post to thank the performers, “I have been through 3 Lunar shows, and each one was crazier than the previous one. Lunar means so much to me because it unifies people and spreads joy across campus. I’m also grateful for the opportunity to share an important part of my life, Wushu, in front of my friends. I hope you all had fun and learned a little about Asian culture along the way.”

If you still have the opportunity to participate in an IMSA Lunar New Year show, take the chance to join something incredible.

Be the first to comment on "Lunar New Year: The Best Yet"