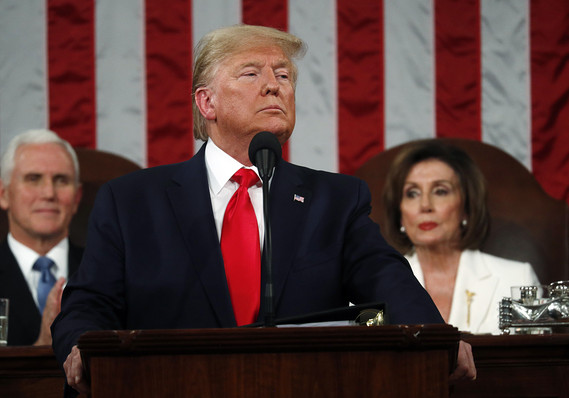 Donald Trump while giving Union address, with Vice President Mike Pence and Speaker of the House Nancy Pelosi in the background. | Image by Getty Images

As many of you know, the State of the Union address occurred on February 4, in Washington D.C. For context, the state of the union is an address to Congress by the president that includes a message regarding the budget and an economic report. This also allows the president to propose a national agenda and announce priorities. Usually the president, but sometimes the speaker of the house as well, may have guests in the audience who they highlight throughout the address. Here are the main points to take away from the 2020 State of the Union Address.

President Trump’s remarks began with a statement on the economic policies of his administration. This included a statement that there has been a record low on unemployment rates for racial minorities, veterans, and those with disabilities.  There was also a mention of a high increase in employment rates for women. Trump then made a highlight on the increased success of the stock market, reporting that “have soared 70 percent.” This portion ended with comments on the NAFTA, North American Free Trade Agreement, and the signing of a new agreement between America, Mexico, and Canada.

As per usual, after the report on economics, Trump addressed topics of interest to his administration. He began by addressing the increased investment of money into the military, as well as honoring a Tuskegee Airmen. He then led this into the proposal of an education act and reported successes in healthcare availability by his administration, followed by asking Congress to pass a bill limiting rights to abortion and expressing the crackdown on immigration to be positive. The last issue he highlighted was the choice to kill Qassim Suleimani and make comments about Iran.

One of the more well-known moments during the State of the Union was the awarding of the Presidential Medal of Freedom, the highest civilian honor, to Rush Limbaugh, a conservative political commentator who was awarded this honor for his work as a speaker. However, the choice of awarding Limbaugh the Medal of Freedom is shrouded in controversy, because of the numerous racist, xenophobic, and sexist comments made by Limbaugh throughout his career. Another more familiar moment from after the address was when Nancy Pelosi, the Speaker of the House, ripped up her copy of the speech because in her words it was a “manifesto of mistruths.”