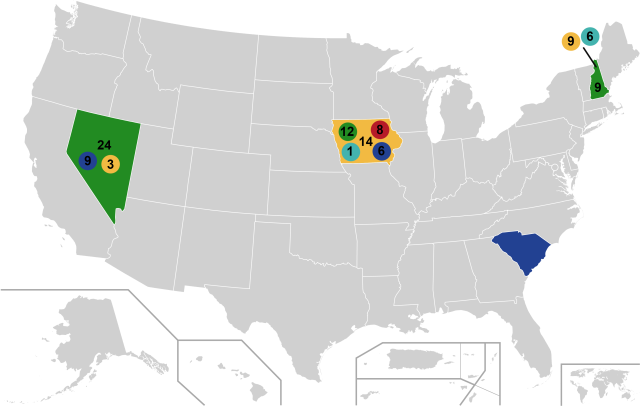 This map shows the break down of the delegates in the four initial primaries. Sanders is Green, Biden is Blue, Buttigieg is Yellow, Warren is Red, and Klobuchar is Teal | By HoxtonLyubov - Wikimedia Commons

As we are nearing Election Night, it has become high time to decide the nominees of each party. This process gives the primaries and caucuses their special meaning, and are becoming more and more important as we approach Super Tuesday on March 3rd. 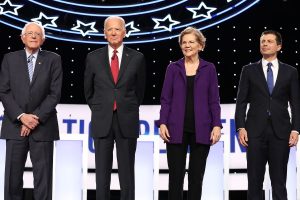 The first polling began on February 3rd with the Iowa Caucus. There were 11 candidates entered in the caucus: Joe Biden, Pete Buttigieg, Bernie Sanders, Andrew Yang, Elizabeth Warren, Amy Klobuchar, Tom Steyer, Mike Bloomberg, Tulsi Gabbard, Micheal Bennet, and Deval Patrick. This caucus was heavily contested, especially between Sanders and Buttigieg, as this would establish the base to reach the 1,991 required delegates to have a chance at nomination for the Democratic Party. The Caucus’ reports were delayed until February 7th due to final checks and inconsistencies in the polling. After they were released, it was shown that Buttigieg held a small lead over Sanders, with 14 pledged delegates, while Warren, Biden, and Klobuchar came in 3rd, 4th, and 5th, respectively. There was confusion due to Sanders winning the higher percent of the people’s vote in comparison to Buttigieg, but only having 12 pledged delegates.

This Caucus led directly to the New Hampshire Primaries on February 11th, and Buttigieg’s premature announcement of victory in Iowa helped him heavily in New Hampshire, a state where Sanders was consistently polling in high numbers. This boost helped Buttigieg contest the polling number of Sanders, with both winning the same number of pledged delegates (9) and Sanders winning 26% of the people’s vote and Buttigieg winning 24% of the people’s vote. Klobuchar came in third, with 6 pledged delegates. Warren came in 4th and Biden came in 5th. This polling led to three candidates dropping out of the race after not winning enough delegates: Micheal Bennet, Andrew Yang, and Deval Patrick.

The next polling was in Nevada on February 22nd, with 36 possible delegates to pledge. The event took a turn for the unexpected, as Biden easily polled higher than Buttigieg, while Sanders retained the lead. Sanders won almost 50% of the people’s vote and 24 delegates, but Buttigieg dropped heavily, only winning 14% of the people’s vote and only 3 pledged delegates. Biden won 20% of the vote with 9 pledged delegates. Warren and Steyer came in 4th and 5th, respectively. The Nevada Caucus helped boost Biden into the South Carolina Primary, where his big win pushed him high into the polling numbers. 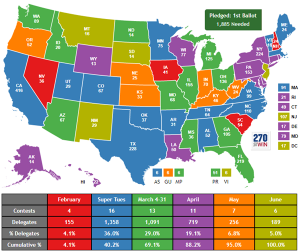 This picture shows the number of pledged delegates by state. | | 270towin.com

This victory cemented Biden into the high polling numbers as we enter Super Tuesday on March 3rd, when the results of 14 primaries and one caucus are calculated: Alabama, Arkansas, California, Colorado, Maine, Massachusetts, Minnesota, North Carolina, Oklahoma, Tennessee, Texas, Utah, Vermont, and Virginia primaries and the American Samoa caucus. This Tuesday would determine who would still stay in the run for the nomination and who is going to drop out. Leading into Super Tuesday, Sanders is holding the lead with 58 pledged delegates, while Biden, coming from the big win in South Carolina, is holding a close second with 50 pledged delegates. Buttigieg, Warren, and Klobuchar are currently in third, fourth, and fifth place, respectively, with Buttigieg having 26 pledged delegates, Warren having 8 pledged delegates, and Klobuchar having 7. This Super Tuesday holds many big ticket states, like California with 416 delegates, Texas with 228 delegates, and North Carolina with 110 delegates.

Be the first to comment on "The Road to 1991: The Democratic Primaries and Caucuses"