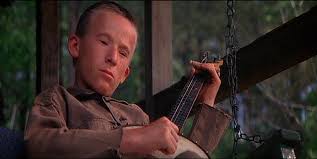 One of the characters engages in a banjo duel with a local in the first few minutes.

As time progresses, so does the world’s film industry. Movies have adapted to fit the social norms, advancements in technology, and relevant events of their time. I recently watched a movie named Deliverance, directed by John Boorman. Released in July 1972, I wanted to assess the 47-year-old movie’s controversies and features.

Deliverance follows the story of four middle-aged men who want to take a break from their daily lives to go on a canoeing trip in rural Georgia. What starts at a peaceful trip turns into a deadly disaster as the men encounter rough rapids and unwelcoming locals. In the years since its release, Deliverance has scored a 90% on Rotten Tomatoes and was nominated for three Oscars, including best picture, and five Golden Globes.

The scariest thing about this movie is the underlying horror. It’s not classified as a horror and by no means is it gory or bloody, but it will make you shiver. The main characters are average people. You don’t turn your head when you walk past them, but they’re not outcasts. These average men go on a canoeing trip and things turn ugly very fast. Any viewer has no option but to feel a sense of remorse and fear for these men. While most of the gritty details are not shown, the film has a share of sensitive scenes, including male sexual assault, a character being shot with an arrow, a thigh bone protruding through the skin after an accident, and a body with a dislocated arm.

If you’ve heard “squeal like a pig!”, it’s from Deliverance. This famous line is said during the most controversial scene when Ned Beatty’s character is being sexually assaulted by a local madman. His friend is tied up and forced to watch, unable to help. This type of sexual assault is not typically featured in modern movies. However, during the 1970s, experimental films dominated the industry.

Michael Wilmington, a movie critic for the Chicago Sun-Times, writes about the 70s film industry, “The scripts were better, the ideas more daring, the execution freer, and most of all, the connections to the real world of American life outside much stronger and deeper”. Filmmakers in the 70s were not trying to appeal to a massive audience or make a large profit, so they often added elements that were not typical Hollywood style. Evident in the horror-like scenes, Deliverance contained experiments sought in the daring 70s film industry.

Acclaimed films from the 70s include: