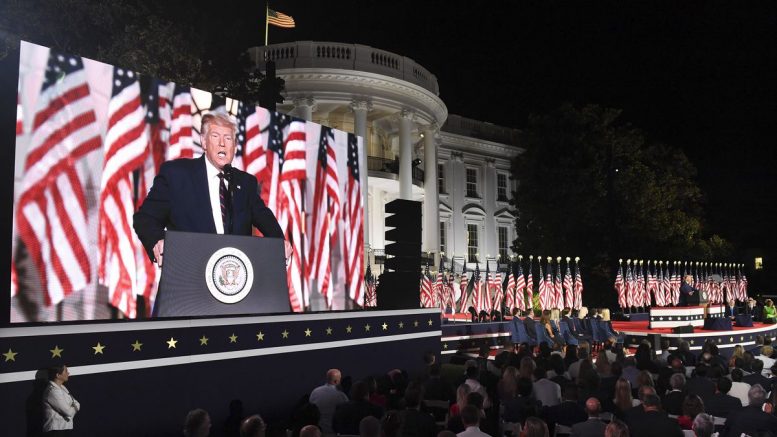 Trump speaking from the White House for the final night of the RNC|| vox.com

The 2020 Republican National Convention kicked off earlier last week, one week after the Democratic National Convention. This election’s convention was tense, with millions of Americans facing unemployment, civil unrest, and a raging pandemic. On the first night, August 24, the convention opened with an inspiring montage of American icons, with a narration extolling the Trump presidency. Some of the notable speakers of the first night included Senator Tim Scott of South Carolina, who celebrated tax cuts under the Trump administration and denounced Biden for some of his comments towards African Americans. Mr. Scott emphasized a hopeful future for a new American century. Many speakers attacked the Democratic party, a theme that continued throughout the convention. Their grievances included calls to defund police and unrest that occurred in Democrat-led cities such as Minneapolis, Chicago, Portland,  and Kenosha. Kimberly Guilfoyle and Donald Trump. Jr accused the Biden campaign of socialism and moving jobs overseas, and rallied against what they described as “cancel culture.” 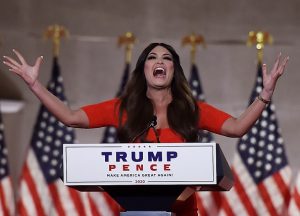 Kimberly Guilfoyle spoke out against cancel culture and socialism on the first night.

The second night featured President Trump pardoning a man convicted of bank robbery and presided over a naturalization ceremony for new citizens. Secretary of State Mike Pompeo delivered remarks from Jerusalem, praising Trump’s bold military initiatives. Nicholas Sandmann, the Kentucky teen who in 2019 confronted Native American protestors in front of the Lincoln Memorial, spoke out against unfair treatment by the news media, an issue that Trump has mentioned often throughout his presidency. Eric Trump, another son of the President, also rallied against “cancel culture” and rallied against the removal of confederate statues and NFL who kneel during the national anthem. The First Lady closed the night with a speech from the White House Rose Garden. The crowd was neither socially distanced nor wearing masks. Mrs. Trump addressed the pandemic and unrest in the country. 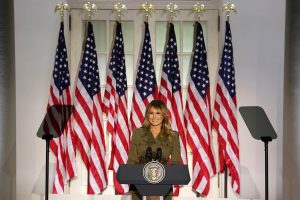 On Wednesday, the third night, Vice President Mike Pence formally accepted the Republican nomination. Pence spoke from Fort McHenry in Baltimore, and emphasized the stark difference between the parties, repeating attacks against Democrats stated by other speakers. He evoked images of a lawless, violent American life that Biden promoted by seeking to cut police budgets. However, Mr. Biden has no such plans to defund police. Pence went on to mourn for lives lost during the pandemic. Other speakers earlier in the night took a different approach, and attempted to highlight the caring side of the president. White House Press Secretary Kayleigh McEnany described the emotional support she received from the president after undergoing surgery. Senior Advisor Kellyanne Conway lauded the President’s problem-solving skills and loyalty to his country. 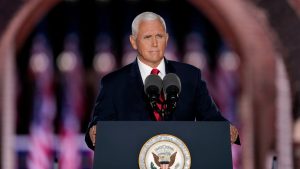 On the final night of the convention, Trump accepted the Republican nomination. Nearly 2,000 Republicans gathered on the South Lawn of the White House to watch, still not socially distanced and still without masks. In his speech, Trump described Joe Biden as a sinister socialist whose agenda would destroy the American dream and crush our industry. Trump went on to promise the nation that a vaccine for COVID-19, which he refers to as the “China Virus,” will be available by the end of the year. He proudly announced the deportation of 500,000 people and claimed that his border wall, a significant policy for the Trump administration, will soon be complete. The president claimed that he had done more for the Black community than any president since Lincoln. He ended the convention with patriotic rhetoric, calling for all citizens of the USA to come together and make America greater than ever before. 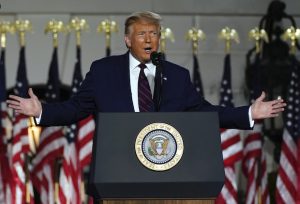 The next big event for the 2020 election is the first presidential debate, scheduled for September 29.

Be the first to comment on "The Republican National Convention: A Recap"