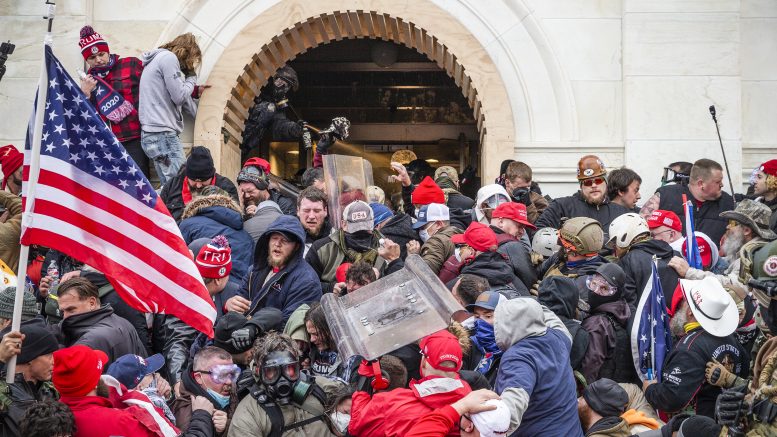 On January 6th, 2021, the day that Congress met in a joint session to confirm Joe Biden’s electoral victory, then-President Donald Trump gave a speech where he encouraged his supporters to “fight like hell” to “take back our country,” suggesting a march toward the Capitol.

Before he finished his speech, some of his supporters had already left the rally, heading toward the Capitol. Not long after, two bombs were discovered: a pipe bomb was reported at the Republican National Committee building, a block away from the Capitol, and then another device was found at the Democratic National Committee headquarters.

Trump finished his speech, and told his supporters to “walk down Pennsylvania Avenue” and then directly told them “we’re going to the Capitol.” Meanwhile, outside the Capitol, the mob continued to violently clash with the officers. At this point, a request for immediate assistance from D.C. National Guard was made by Chief Steven Sund of the Capitol Police. Inside the Capitol, the House and Senate were still debating on certifying the vote, and they had moved to their separate chambers, seemingly unaware of what was occurring outside.

Just 11 minutes later, rioters on the west side breached the Capitol and reached the stairs beside the Senate chamber, causing the Senate to call a recess. Just five minutes after the first rioters broke into the Capitol, the House also went into recess.

Three hours after the violent rioters raided the building, the sergeant-at-arms declared the building secure. As of January 19, 2021, 85 men and 11 women have been arrested for crimes relating to the Capitol riot.

Several individuals were charged with unlawful entry on the Capitol grounds, which is a crime under the Washington D.C. criminal code and federal law. Also, many of the rioters have been charged with gun-related offenses. There are federal laws against carrying a gun in the Capitol building and for possessing an unregistered firearm or unlicensed ammunition in the District of Columbia.

Additionally, seven people were charged by the FBI and the Department of Justice for conspiracy. Three of these people were members of an extremist organization known as the Oath Keepers, a far-right group that believes and promotes the conspiracy theory that the federal government has been taken over and will strip the rights of citizens. Despite all these charges, there has yet to be a person (or people) charged for the death of Brian Sicknick, a Capitol Police Officer, even after the United States Attorney’s office in Washington opened a federal homicide investigation.

In total, there were five deaths from the day of the Capitol riot.

Another consequence of the Capitol riot was the second impeachment of Donald Trump. He is the first president in U.S. history to be impeached twice. He was charged with inciting insurrection by encouraging his supporters to storm the Capitol. The article of impeachment stated that Trump “repeatedly issued false statements asserting that the presidential election results were fraudulent and should not be accepted.” The House of Representatives has voted to impeach Trump, and has delivered the impeachment article to the Senate for a trial.

Be the first to comment on "Capitol Riot Summary and Aftermath"