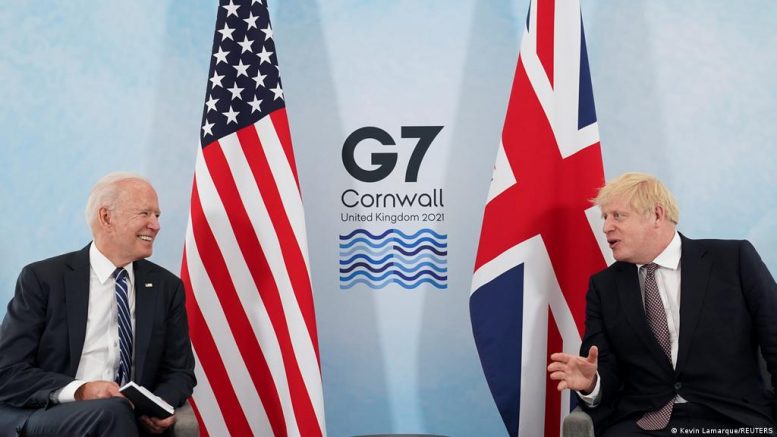 The G-7 leaders have promised a contribution of one billion coronavirus vaccine doses to poorer countries in an effort to allay fears about vaccine nationalism. Over the course of this year, the world’s largest economies — as defined by the G-7 — have been chastised for not donating more vaccines to countries with limited resources. For example, the United States has mandated that vaccinations be sent overseas only when it has achieved a sufficient level of immunization inside its borders. Similar criticism has been directed towards the United Kingdom and the European Union. The UK government refers to this number as “over one billion,” although it really represents 7.9% of the critically needed doses throughout the world. It would take 11 billion vaccinations to vaccinate 70% of the world’s population, at which point the virus would officially be considered controlled.

On June 11th, when the summit began in the coastal town of Carbis Bay in Cornwall, southwest England, British Prime Minister Boris Johnson told leaders that the conference was an opportunity to learn from the coronavirus crisis and avoid making the same mistakes. “We must now allow our economies to recover,” he asserted, emphasizing the importance of an equitable future

According to a statement released by the United States government, the G-7 nations — the United States, United Kingdom, Canada, France, Germany, Italy, and Japan — intend to end the pandemic next year and will increase their individual contributions. Britain said it will contribute at least 100 million more coronavirus vaccination doses in the next year. Earlier this week, the US announced that it will send 500 million doses of the Pfizer-BioNTech vaccine to low-income nations. Biden also laid forth a plan for the G7 countries to work together to enhance vaccination access. British Prime Minister Boris Johnson stated that 5 million doses from the United Kingdom were distributed in June, with the remaining vaccines being distributed over the next year.

The United States intends to buy and distribute 500 million doses of Pfizer/mRNA BioNTech’s COVID-19 vaccine as part of the worldwide vaccine-sharing initiative. The distribution will be handled by the worldwide COVAX alliance, and it will benefit 92 low-income countries as well as the African Union. More vaccine doses will be sent to these nations in August, with up to 200 million doses distributed globally by the end of 2021, according to Biden. In the first part of next year, the remaining 300 million vaccination doses will be provided. As a result, the United States is COVAX’s largest vaccine contributor and single greatest sponsor, with a promise of $4 billion. Given the worldwide COVAX alliance’s sluggish start to its vaccination campaign, the G7 leaders’ commitment to vaccine sharing is promising news. Despite the fact that the alliance has given almost 81 million vaccine doses throughout the world, portions of Africa and other countries have generally been unable to access these doses. Ursula von der Leyen, President of the European Commission, who will represent the EU at the G-7, remarked: “We do subscribe to the G-7 aim to end the pandemic by 2022 by stepping up the global vaccination rate.”

Health authorities believe that sharing vaccinations is the only way to entirely halt the epidemic. This is because the virus may evolve and spread around the planet for as long as it exists. Lockdowns, social distancing, and other preventive measures, on the other hand, are likely to continue to harm global economic production. In addition, the International Monetary Fund estimates that the US$50 billion cost of vaccinating 60% of the world’s population by mid-2022 would be overshadowed by the US$9 trillion in enhanced global production that would ensue, with benefits distributed across poor, emerging, and developed countries.

The World Health Organization (WHO) and the Global Alliance for Vaccines and Immunization (GAVI) have partnered to create the COVAX facility, which seeks to obtain 2 billion vaccine doses for low-income countries by the end of 2021. It’s important to avert public health disasters in impoverished  places, preventing new strains from threatening the efficacy of existing vaccinations, and improving the global economy while reducing poverty and inequality. According to statistics from Johns Hopkins University, there have been more than 174 million cases and 3.7 million fatalities of COVID-19 globally since the outbreak began. Amnesty International, Health Justice Initiative, Amnesty International, Stop AIDS Campaign, Oxfam, and UNAIDS are among the groups that make up the People’s Vaccine Alliance. The alliance has calculated that if current trends continue, the world’s poorest countries would not be able to fully vaccinate their populations until 2078. Meanwhile, by January 2022, all G7 countries will have vaccinated their people.

However, there should be no disagreements about global vaccination: implementing a program as soon and extensively as feasible is in everyone’s best interests. Vaccinating the globe is a once-in-a-lifetime opportunity to combine moral purpose with self-interest.

The G7 has also been criticized for not doing more to waive intellectual property rights on COVID-19 vaccines and allow for the issuance of compulsory licenses. Governments give these licenses to allow firms in a nation to manufacture items, such as vaccines, without the permission of patent holders. Expanding not-for-profit vaccine manufacturing through regional collaborations with other pharmaceutical firms, as AstraZeneca has done, might be a more effective approach to fulfill the urgent demand. It has collaborated with over 20 different companies while maintaining a high level of quality control.

Not every G7 meeting can result in significant global change. But, if the G7 has goals and promises that are so narrow, what precisely is it for? Its mistakes remind us all that, in order to solve our generation’s defining crisis moment, worldwide unity is critical.

Be the first to comment on "G7 Countries Donating Vaccines"