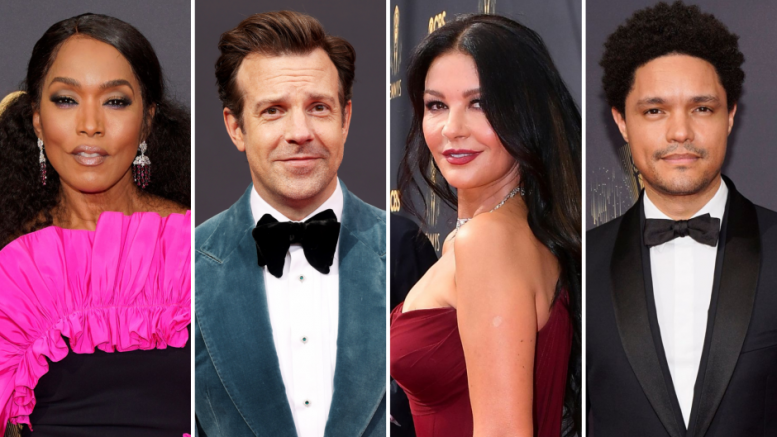 Photos of Outfits and Celebrities at the 2021 Emmy Awards Show | Source: Closer Weekly

The Emmys Red Carpet has once again stolen the show. The 73rd annual Emmy Awards was held on September 19th and presented a great number of celebrity appearances. The award show aims to award outstanding achievements in the television and film industry. There were a plethora of outfits displayed, varying from designer long ballgowns to custom suits and accessories. Since the 2020 Emmy Awards show and acceptance speeches were presented through a virtual platform, the 2021 in-person award show was the perfect opportunity to showcase new fashion trends and breathtaking looks. Make sure to keep reading to learn more about five unique looks from the Emmys Red Carpet. 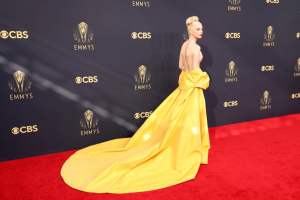 Anya Taylor-Joy is a British-American actress and is best known for her roles as Thomasin in The Witch (2015), Lily in Thoroughbreds (2017), and Beth Harmon in The Queen’s Gambit (2020). She was seen parading a pale silk and satin yellow dress by Dior Haute Couture with a bright yellow opera coat. Many commented that her Hollywood hair and makeup tied together this exquisite and clean Red Carpet look. 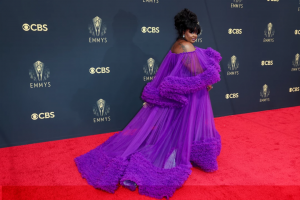 Nicole Byer is known as an American actress, comedian, television host, podcast host, and author. Her best-known role is serving as the host of the Netflix Bake-Off show, Nailed It!. She earned her big break as a comedian when she landed a role in the MTV series, Girl Code. Her Red Carpet look featured a long purple dress that showcased areas of sheer fabric. This Cristian Siriano dress also contained ruffles on its ends, and Byer’s natural makeup completed the striking look. 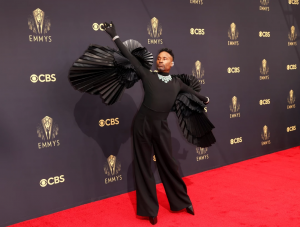 American actor and singer Billy Porter burst into the scene when performing as a Broadway star. Porter is already well known for his extravagant, put-together, and mouth-dropping looks, but for the 2021 Emmy Awards, he showed up in all-black attire and wings. Wearing wide-legged pants and an upper bodysuit, Porter topped off his outfit with black wings custom-made by Ashi Studio Couture. Along with the wings, the diamond jewelry on his fingers, wrists, ears, and neck also caught many viewers’ attention. 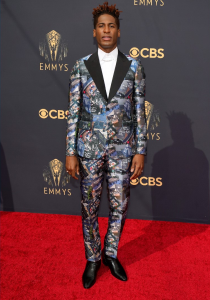 Singer, keyboardist, and composer Jon Batiste is known as a performer who incorporates jazz practices into his work. His fascination with jazz stems from his connection to his New Orleans home. In fact, his Emmy Awards outfit was also inspired by New Orleans. Batiste had a custom suit made showcasing pictures of the aftermath of Hurricane Katrina in order to honor the lives lost due to the natural disaster. 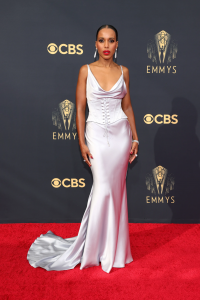 Kerry Washington is an actress and producer who is best known for her role as Olivia Pope in Scandal (2012). Her look at the 2021 Emmy Awards was described as Old Hollywood because of the trendy silver satin slip gown and corset top. Her silver jewelry and natural makeup tied together the simplistic but sophisticated look.