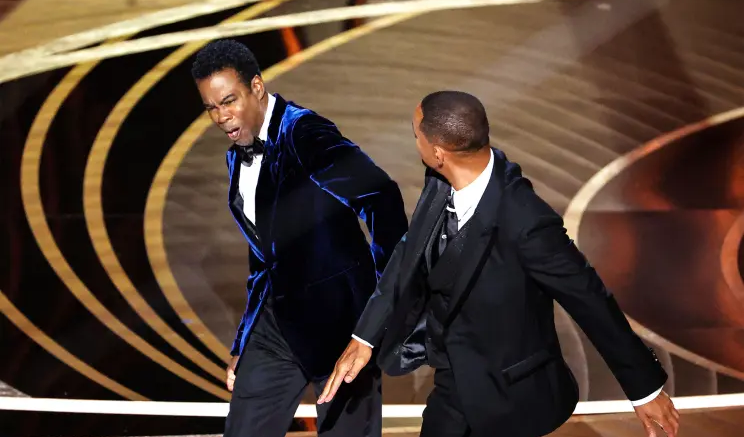 On March 27, the awards ceremony took place at the Oscars’ traditional home at the Dolby Theatre at Ovation Hollywood and aired live on ABC and in more than 200 territories worldwide.

From Will Smith smacking Chris Rock to the Oscars winners being announced, this year’s Oscars was filled to the brim with excitement.

Comedian Chris Rock took the stage to present the best documentary feature award. In a televised interview on April 1, Oscars producer Will Packer gave insight into what occurred before the slap.

“I said, ‘Watch this, he’s going to kill.’ I knew he had an amazing lineup of jokes that we had, we had them in the prompter. And ultimately he did not get to one joke. He didn’t tell one of the planned jokes, he was just immediately freestyling — but I’ll tell you, if there’s anybody you don’t worry about going out in front a live audience and riffing off the cuff, it’s Chris Rock. Nobody’s better,” Packer said on “Good Morning America.”

While Rock was presenting an award, Jada Pinkett Smith’s head was jokingly compared to Demi Moore’s bald “G.I. Jane” character. Rock turned to Pinkett Smith and said, “Jada, I love you. ‘G.I. Jane 2,’ I can’t wait to see it.”

After seeing that his wife was upset, Smith took the stage and slapped Rock across the face. Smith returned to his seat and bellowed at Rock, “Keep my wife’s name out of your [redacted] mouth.”

Later when Smith was accepting the Best Actor award for his leading role in the tennis drama “King Richard,” Smith apologized to the Academy and his fellow nominees.

The following day, he issued a public apology on Instagram directed to Rock, “the Academy, the producers of the show, and all the attendees and everyone watching around the world.”

On Instagram, he wrote, “My behavior at last night’s Academy Awards was unacceptable and inexcusable. Jokes at my expense are a part of the job, but a joke about my Jada’s medical condition was too much for me to bear and I reacted emotionally.”

Two days after the slap, The Academy met with Will Smith over Zoom before its board of governors to discuss the actor’s Oscar attack on Chris Rock. Smith apologized to Academy President David Rubin and CEO Dawn Hudson during the call. He said that he is aware that hitting Rock will have repercussions.

On April 1, Will Smith resigned from the Academy. In a statement provided to The Hollywood Reporter, Smith said he had “betrayed” the trust of the Academy of Motion Picture Arts and Sciences with conduct that was “shocking, painful, and inexcusable.”

He said in the statement: “I have directly responded to the Academy’s disciplinary hearing notice, and I will fully accept any and all consequences for my conduct.”

His statement continued: “I deprived other nominees and winners of their opportunity to celebrate and be celebrated for their extraordinary work. I am heartbroken.”

He concluded: “So, I am resigning from membership in the Academy of Motion Picture Arts and Sciences, and will accept any further consequences the Board deems appropriate. Change takes time and I am committed to doing the work to ensure that I never again allow violence to overtake reason.”

In response, David Rubin, President of the Academy, said in a statement: “We have received and accepted Mr. Will Smith’s immediate resignation from the Academy of Motion Picture Arts and Sciences.

“We will continue to move forward with our disciplinary proceedings against Mr. Smith for violations of the Academy’s Standards of Conduct, in advance of our next scheduled board meeting on April 18.”

In an update on the Academy’s final decision, Smith has been banned for 10 years from all Academy-sponsored events, including the Oscars, for 10 years.

Getting past the drama and onto the purpose of the Oscars — to recognize achievement in the film industry — there were multiple nominations and winners, with The Power of the Dog leading the Oscars’ nominations with a total of 12, with Dune following close behind with 10.

Here are all the winners from the 2022 Academy Awards:

Actor in a leading role: Will Smith in “King Richard”

Actor in a supporting role: Troy Kotsur in “CODA”

Actress in a leading role: Jessica Chastain in “The Eyes of Tammy Faye”

Actress in a supporting role: Ariana DeBose in “West Side Story”

Directing: “The Power of the Dog” — Jane Campion

Music (Original Song): “No Time to Die” — Music and Lyric by Billie Eilish and Finneas O’Connell

And The Host Is… Seth MacFarlane?!

Be the first to comment on "Oscars 2022: Smith’s Slap and Award Winners"