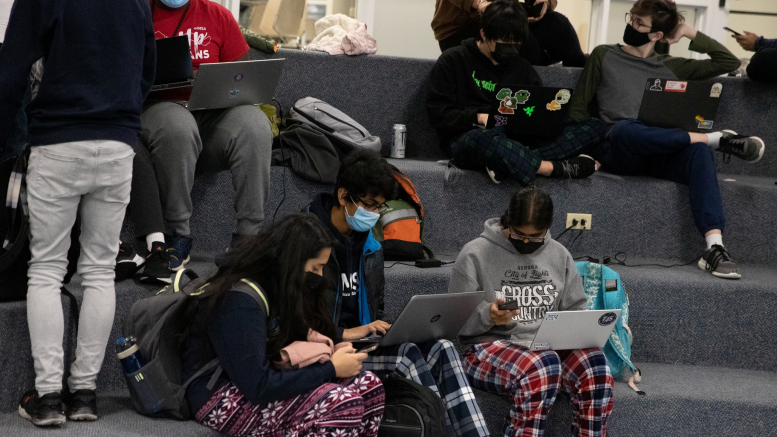 Titan Crew was intended to foster a sense of community between students and faculty. | Source: IMSA Student Productions

As IMSA’s academic schedule undergoes changes (for instance, extending classes to fifty minutes and shortening mid-day), it’s hard to ignore the presence of Titan Crew (TC). TC was initially implemented in the 2020–2021 school year to help allay feelings of social isolation in remote learning but has followed students since. There are a multitude of varying perspectives and sentiments towards the program, many of which The Acronym reported on in “The Case Against Titan Crew.”

Over the course of the summer, The Acronym sat in on meetings between Student Council (StudCo) and IMSA Administration, namely Principal and Chief Academic Officer Dr. Comfort Akwaji-Anderson, who spearheaded the launch of the Titan Crew program. The Acronym also interviewed the leadership of StudCo and the Campus Activities Board (CAB) to get a more precise understanding of their stance relating to Titan Crew.

StudCo first approached discussions concerning Titan Crew with rosy hopes, making proposals including a complete termination of TC or modifying it to be optional or once-a-week. StudCo also proposed replacing it with Jefferson Dinners, a prior program that brought together students and faculty at dinner. However, Dr. Akwaji-Anderson repeatedly made it clear that Titan Crew will happen no matter what and that it will be mandatory and twice a week.

StudCo heeded this demand and shifted gears, proposing Titan Crew to run for only the first semester. StudCo argued that since the main intent behind TC was to foster relationships between students and teachers, once the relationships had been built in the first semester, there wasn’t any reason to run it in the second semester. However, this idea was also rejected by administrators, who argued that TC is meant to form student-teacher relationships that should be sustained throughout the entire school year.

Finally, StudCo proposed implementing a system to match students with peers who have common interests. Administrators were receptive to this idea and were willing to collaborate.

StudCo President Yina Wang explains how an administrator brought up the idea of a project-based Titan Crew. Essentially, the plan would be to bond and become acquainted with one another during the first semester of Titan Crew, but the second semester would be to complete some sort of project. Ideas have included a relaxing project on a topic of interest or surrounding a UN SDG. StudCo has brought up concerns regarding redundancy given that it would be very similar to LEAD’s annual Student Leadership Exchange (SLX) and other student programming that occur. However, administrators hope for this to be a low-stakes, stress free project for students to partake in.

Another concern that administrators addressed is how students have vastly different experiences in TC depending on their assigned teacher. A more standardized experience could potentially decrease resentment towards the program. In response to this concern, a syllabus has been developed for all Titan Crew groups to follow this academic year.

When asked how receptive administration was towards their requests, Vikram Karra, the Campus Activities Board Director, shared that, “There was no indication that student opinion would change their direction with Titan Crew.” However, what truly is the student opinion regarding Titan Crew?

Over the past two years since Titan Crew was implemented, there have been multiple surveys released to gather feedback and assess the success of the program. With each semester, fall and spring, there have been Qualtrics surveys from the Office of Institutional Research (OIR) as well as the survey released by the Titan Crew Action Team.

Administration seems to favor research from the OIR, finding it to be more representative of the student body’s opinion. Wang explains that, “Dr. Pareja, Executive Director of the Office of Institutional Research, thought that the teacher survey was conducted with an agenda and thus was unreliable, although this does not reflect what the Student Council thinks. The Action Team addresses the OIR surveys within their report, specifically noting points that these surveys had not addressed such as:

The Action Team’s report wrote that surveys from OIR place student satisfaction at around 50%. This may be partially due to the fact that the first two surveys were conducted during online learning, and the third was conducted as students were making their transition back to in-person learning. In these times, it was harder to form connections with peers and teachers. However, it is clearly evident that once students have been able to form those relationships, especially considering that we are now in-person, the need for the program diminishes as demonstrated by the Action Team’s survey conducted on November 17, 2021 with 439 respondents.

However you may feel about Titan Crew, the program will stay in place this upcoming school year. Surveys such as the ones sent by the OIR and the Titan Crew Action Team are meant to solicit feedback, understand varying perspectives towards TC, and are an excellent avenue for students to advocate for themselves and initiate change.

Students can also speak with any StudCo member regarding questions or concerns regarding the program, as they will be meeting with Dr. Akwaji-Anderson and Mr. Gaszak throughout the school year to improve Titan Crew.

Be the first to comment on "An Update On Titan Crew: New Additions and Initiatives"