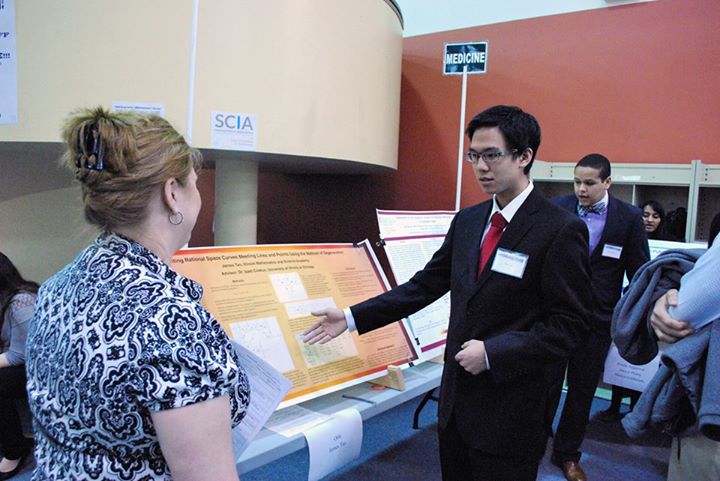 In a culmination of months of work, IMSA students filled the main building on April 17 to present on everything from medicine to history to mathematics and seemingly everything in between. Students, faculty, and staff were joined by several legislators in milling around, learning about the work of many IMSA juniors and seniors.

At IMSAloquium, students started the day with poster presentations on their SIR projects. They then split into separate rooms in the school to present a more-depth analysis of their work. “It was really interesting to learn about topics my peers are interested in,” says Haneesha Paruchuri (’15), who studied the similarities between the RNA binding proteins TDP-43 and FUS in association to ALS. “I was able to understand a lot more this year than last year because of what I’ve learned at IMSA.”

Some students were recognized in programs outside of IMSA. Juniors Sameeksha Malhotra and Grace Duan were chosen as Intel International Science and Engineering Fair (ISEF) finalists for their project, which included using electroencephalograms and functional magnetic resonance imaging to identify differences in active brain regions. “To be chosen as a finalist is an honor that was a complete surprise,” says Grace. With all of the outstanding projects at our regional IJAS science fair, it was beyond my expectation.”

Sameeksha echoed that sentiment. “My partner, Grace Duan, and I were so excited when we were chosen as finalists, and we’re currently working on improving our project for this fair,” she says. “Honestly, we had no idea what ISEF even was when we first started our SIR, and this just shows how much it opened our eyes about the number of opportunities available to us through the SIR program.”

After seeing the wide variety of projects, many sophomores came away with favorable impressions of the SIR program. “I think that SIR provides the opportunity for legitimate research that allows students to engage their minds with advisors that have experience in the fields,” says Jason Yang (’16). “And IMSAloquium is a really cool time where these students get to showcase their accomplishments, and I think it’s a really fun, interesting occasion.”

“I have gained so much more from SIR than I would have ever expected going into junior year,” says Grace. “If it meant I could have the same experience again, I would give up all of the extra hours of sleep on I-Days in the world for SIR.”

Find the full collection of research abstracts on the IMSA website.