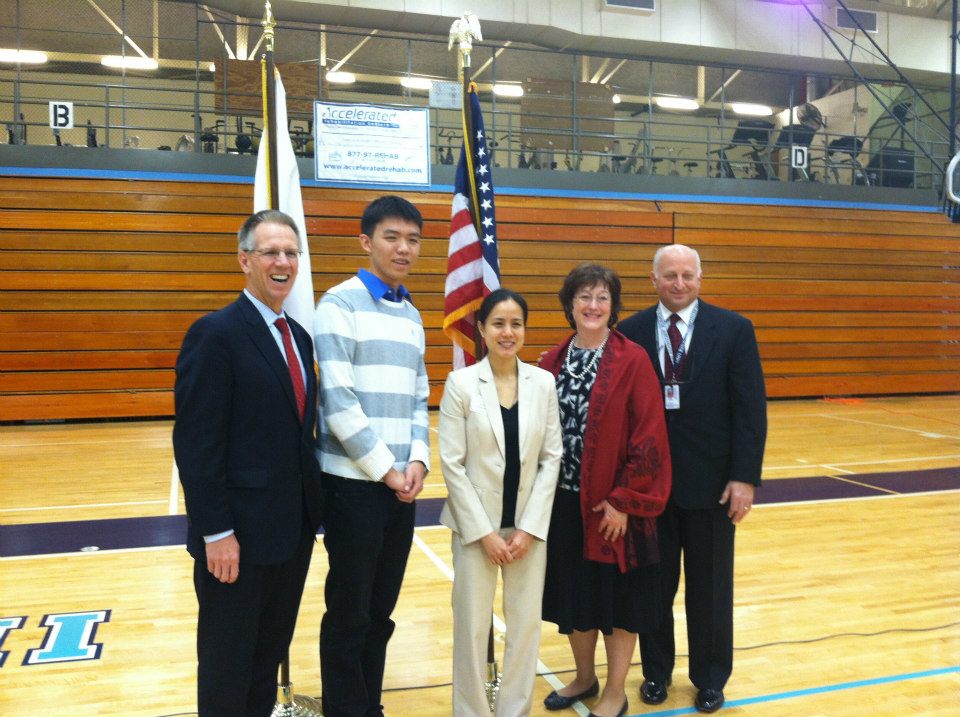 “We use the term recognition because we are recognizing who served our nation; it is what this day is all about,” Jim Bondi, Chief of IMSA Security and a war veteran,  welcomed the IMSA faculty and students to the annual Veteran’s Day assembly. After finishing their shortened morning classes, the whole student bodyattended  the assembly program.

Kevin Zhang, Student Council President, led opening remarks as he stated, “I’d like to ask all of you, what does it mean to serve/ We don’t truly understand what it means. But we honor men and women who give meaning to that word. Today, let us serve them.”

The opening remarks were followed by the posting of  the colors, carried out by IMSA Color Guard. Everyone rose for the Pledge of Allegiance and the National Anthem, which was sung by the IMSA’s choir. The audience took their seats for the introduction of the guest speaker. Every year, IMSA asks a service member to speak to the student body. This year, Pearl Phaovisaid, war veteran and IMSA alum, was asked to return thirteen years after graduation to be the keynote speaker for the day’s assembly.

After leaving our Academy, Phaovisaid attended the United States Military Academy at West Point to receive her bachelors in geography and a commission as a Second Lieutenant in the US Army. Additionally, she completed flight school. In 2007, she deployed to Iraq to fly over 200 combat hours and command multiple air transport missions. Her missions included three continents and led to her selection to teach junior aviation officers. Phaovisaid transitioned into senior captain and moved to Thailand to pursue teaching, leading, and serving. Her time was spent on non-profit work such as teaching self-defense to migrant women and coaching youth basketball. Phaovisaid not only went through extensive military schooling including the Aviation Captains’ Career Course, but she also has been recognized and honored with several awards and decorations. These include an Army Service ribbon, Army Aviator Badge, and Army Commendation Medal (oak leaf cluster).

Despite all of Phaovisaid’s accomplishments after her experience at the Academy, the audience felt immediately connected to her as she reminisced about the old days on IMSA’s campus. She looked back to the corner of the gym and laughed.  Then, to clarify, she confessed to being the bench warmer on the Girl’s Basketball team thirteen years back. “Never be content with the half truth when the whole truth can be one,” Phaovisaid uses the cadet code to explain why she confessed to an embarrassing part of her IMSA past. “I want you to know I have been there. You have a friend in me. Whether you are a bench warmer in sports, in life, in love, you will get your shot. Don’t give up. ”

In past years as a student, she doesn’t remember giving much thought to the significance of Veteran’s Day. She didn’t know any veterans then, which is also the case for many IMSA student currently. When she attended IMSA, there was a sense of relative peace in the country. For the majority of the seniors’, juniors’, and sophomores’ lifetimes, the country has been engaged in two wars.

Keeping on the idea of war, she informed the audience of basic war statistics. In World War II, there were roughly 404,500 casualties, according to Phaovisaid. The Iraqi casualties are about 1% of that number.  6,600 casualties may seem like just a number, she said, but each of those figures represents dreams unfulfilled, aspirations left behind and loved ones left unloved. Good people put into impossible situations; imperfect people trying to do their best.  I hope you see them as your own brothers and sisters, neighbors and friends and maybe even yourself. ”

She continued with personal stories about war veterans Louis Falcon, Ryan Freeman, and Karin Han. The stories weren’t meant to justify or glorify war. One must distinguish between war and the war fighter., she said, as they don’t have the decision to pick and choose battles. Although she has never met the veterans that she mentioned, she thinks about them often. Phaovisaid also feels as if there is a binary choice between passion and ambition. Passion is what makes one happy. Ambition is is what will bring success. Soldiers take themselves out of the equation. They work for the greater good through selfless service. Adding to this concept, Martin Luther King , Jr., once said, “Anybody can be great, anybody can serve.”

To close her remarks, Phaovisaid gave the audience three points of advice:

1) “Commit to being a life long learner. Breakthroughs happen everyday. Education is not limited to the classroom. Keep an open mind. Just because you can do something well, does not mean you should do it.”

2) “Get used to failing intelligently. If we only did things at which we are successful then we would never learn anything. Anything worth doing well is worth doing badly at first.”

3) In her words, everyone is a part of a community. The actions and choices you make affect everyone.

In the end, she thanked everyone that has helped her along the way for they are the reasons she was able to speak in front of the student body at the Veteran’s Day assembly.

Chief Bondi closed the assembly by stating that soldiers give up everything in their lives to protect those in the nation that can’t protect themselves.