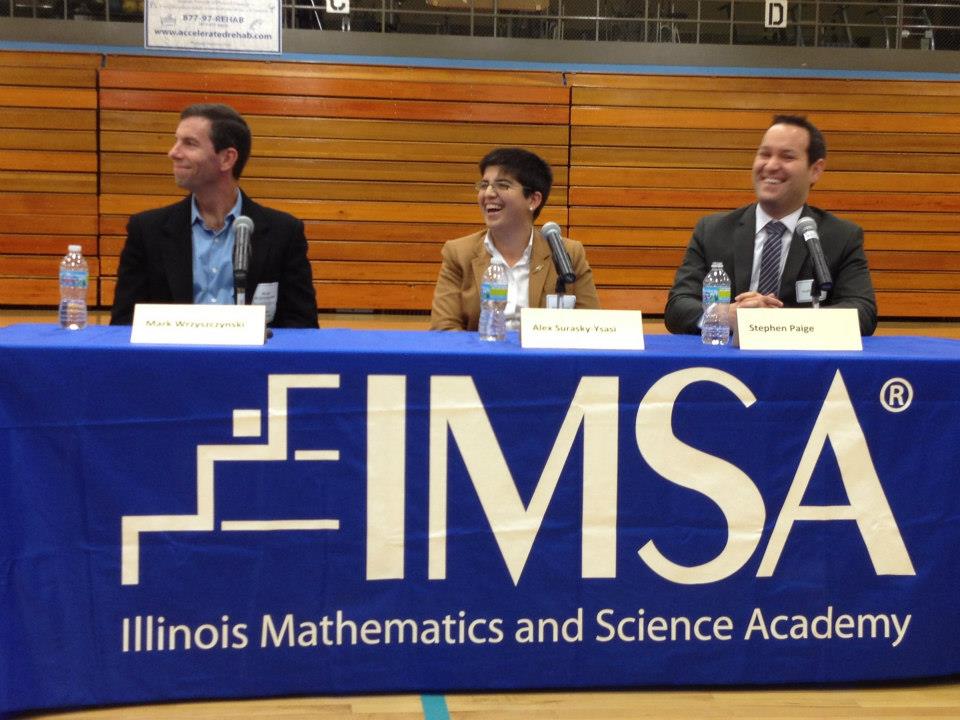 Alumni Paige, Wryszczynski, and Surasky-Ysasi laugh with the audience at the attempts to pronounce Wryszczynski's name.

On October 19th, three Great Minds came to speak with the IMSA student Body through breakout sessions and then later at an open panel for discussion and questions. These three minds belonged to the alumni Stephen Paige, class of 2000, Mark Wryszczynski, class of 1992, and Alex Surasky-Ysai , class of 2003.

Wryszczynski hails from Shell as a project manager in Houston, Texas. He has a master’s in business administration and served in the United States Navy.  Along with those achievements, he has invented a structural clamp and has served as a chairman in an offshore committee.

Surasky-Ysai is a design engineer specializing  in steel plants devoted to agriculture. Before inventing a low cost push cart for farmers in Africa and a small scale electro turbine in Guatemala, she earned her bachelor’s in engineering  from Brown University. Surasky-Ysai focuses on how technologies have the capacity to transform lives in the developing world.

Paige graduated from the Air Force Academy and eventually University of Illinois with a major in aerospace engineering after changing his focus multiple times. Paige began working globally with Shell Oil company  in Russia in 2005 and has since then worked overseas in Eastern Europe and Great Britain,  explaining the value of innovation.  Because the engineering field has the ability to make a lasting impression on the world, Paige strives to help other companies understand the importance of expanding a company’s strength in creativity.

Guna Yerrabolu, sophomore, asked the panel how engineering was at IMSA back in the day. Surasky-Ysai described how she spent hours at a time in an engineering shop behind the Granger lab. She identified herself as an idle kid that was able to play around.

“When you walk into the real world, you don’t know what to do.  Those opportunities in there in tech were really helpful,” said Surasky-Ysai. In her words, take advantage of everything IMSA has to offer.

With an engineer as a mother,  Surasky-Ysai was asked about what it is like to be a woman in the field of engineering and responded that “Things are different. You don’t see things the way everyone else around you sees things. You have to be willing to be assertive; you are going to mess up. It’s hard, I’m the only woman in the engineering department.  If you can, find a mentor or someone to hold on to; you have to believe in yourself, that you are as capable.  Your ideas are just as important and as valuable.”

She is most proud of spending time with clients in Guatemala. She know that  “there are farmers that have a better life because of [her invention].”

Ms. Townsend, an English teacher at IMSA, stepped up to the microphone. She inquired why her computer engineering husband says engineering references human nature. Surasky-Ysai answers by explaining how, in engineering, you are basically convincing people to buy your product. You must understand who you are serving and what they need. You have to understand the world’s reactions. There are engineers who are told to design a gadget, but you must understand where others are coming from. It’s not about making a technical design or being able to deliver. It is about putting yourself in someone else’s shoes.

Surasky-Ysai’s philosophy on engineering is all about action as she explained, “The most important thing you can do is to do. The first thing you have to do is start and mess up; I’ve done that, and I’ve succeeded.”

Colette Moos, junior, asked the panel, “What unique challenges do you face through cultural differences ad communication?” Paige  answered with a personal anecdote.

In Russia, 4 hours east of Moscow, Paige was sent out to oversee the operational jobs on oil. Being paired up with a Russian speaking engineer, while only knowing English himself, Paige was presented with obvious difficulties. Page explains the resolution:  “We had to figure out how to communicate.   I was amazed at the  amount of communication; there was a drive to understand. We were put together and we wanted to [work together]. It’s amazing what is possible, if there simply is the drive to do it. I have yet to have a problem with communication or cultural differences.”

“You have to be ready for the opportunity,” said Paige.  “If you know something that you want to do you have to go out and get it.”

In the words of our president Dr. Max McGee, “I hope you saw what great minds are or look like.  We are seeing the resourcefulness, the imagination, creativity, risk takers, communicators; not just problem solvers but problem finders and I hope you saw yourselves sitting here.”

Be the first to comment on "Great Minds Speak @ IMSA"