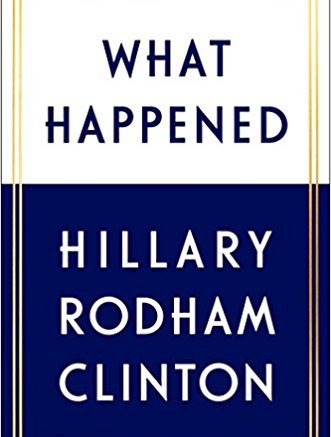 The book cover for "What Happened," by Hillary Rodham Clinton

Over the summer, I decided to finally begin going through the reading list that I accumulated over the school year, and I started with Shattered: Inside Hillary Clinton’s Doomed Campaign, by Jonathan Allen. This was my first foray into political literature and, being written about a campaign that I so closely followed, was a great book to start with (side note: even though it may seem old, this is a fascinating book if you were interested in the 2016 election and want a more in-depth analysis). I think that I enjoyed the book so much because it was very clearly unbiased. I truly believed that it was a book which any person, no matter who they supported, could have read and could have enjoyed, which was very refreshing during a time of partisan political turmoil. Hillary Clinton’s new book, What Happened, came out on September 12 and, based off of the excerpts that have been revealed, this book is about as different from the forward-thinking and refreshing Shattered as it can possibly be.

Granted, Hillary Clinton’s perspective on her loss is going to be biased, and the book is definitely going to offer a perspective that many people wish they could understand. And, yes, Hillary Clinton does have a right to be angry. She lost, and it is perfectly within her right to publish a book about it if she wants to. As Al Franken, a senator from Minnesota stated, “I think she has a right to analyze what happened. But we do have to move on.” Hillary has always been portrayed as an aloof person who tries to relate to the average person but is ultimately out of touch with their wants and needs, and this book is a prime example of why. What this country wants is to move forward, and what this country needs is for Hillary to let that happen. That will not happen by alienating supporters of Bernie Sanders, as she did during an interview about her book on NPR: “But it’s absolutely true that between the consistent pounding on me, first by Bernie Sanders, but more consistently by his supporters, and the theme that Trump stuck with, it really was hard to break out from under that.” That will also not happen by stating that “the Comey letter, aided to great measure by the Russian WikiLeaks, raised all those doubts again. And so even though I won the popular vote, enough people in a few states, with respect to the electoral college, were just raising all these questions.” And, it most definitely will not happen by putting into the question one of America’s most foundational forms of democracy: voting, by blaming voter suppression on losing results in Wisconsin and North Carolina.

Hillary, I am sorry that you lost. It is not fair, and if any of the people that you blamed did something different than the outcome may have been more favorable. But, these are all hypotheticals. This is where we are now: you are not president, and that is not going to change. This book, however, is going to do some major damage, and maybe that is what you want, but the rest of us just want this campaign season to end already. We already know What Happened: it’s time that you come to terms with it too.

Overruling of Roe v. Wade: The History and the Consequences

Be the first to comment on "What Happened: A Premature Criticism"