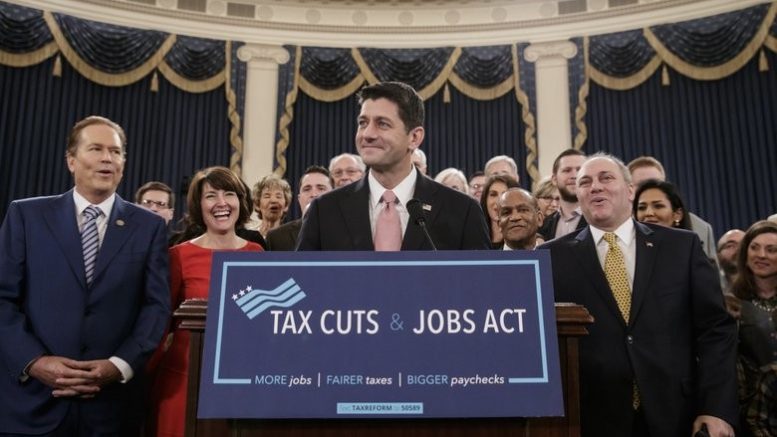 Whatever your opinion on the rest of the GOP tax bill may be, the corporate tax cut may have a strong case.

At 2:00AM last Saturday, December 2, Republicans hurriedly pushed their partisan tax bill through the Senate by a narrow 51 to 49 vote. The Tax Cuts and Jobs Act looks to be the nation’s largest tax code overhaul in three decades.

At its center is a permanent tax cut for corporations. The US corporate tax rate — a tax levied on both small and large companies — will be reduced from 35% to 20%. It’s a massive break. It’s also a hotly contested change. The tax cut, goes the opposing argument, will widen the wage disparity by less heavily taxing the ultra-rich, especially multinational companies. Is such a structure really sound, especially in the long run?

The short answer: yes. A corporate tax reform is urgently needed. Both Democrats and Republicans, as well as many economists, have been calling for a US corporate tax reform for years. The current system is outdated and unfair. An examination of the numbers shows us why.

In the United States, the 35% corporate tax rate is the highest in the developed world. The federal government relies completely on taxes for revenue. Corporate taxes are currently the third largest source of revenue (11% in 2016). Yet in 1952, corporate taxes contributed far more — a whopping 32%. But US corporations have not actually declined in wealth. In fact, they are posting record profits in the 21st century.

Economists attribute this decline to three reasons. The first is simply a tax rate difference. The corporate tax rate was 50% in 1952. It is now 35%. Yet these numbers don’t add up as a solution to our mystery. The current tax rate is 70% of the old tax rate. The contribution to federal revenue is significantly smaller — only 35% of the 1952 contribution. That’s not even considering the fact that corporate profits have dramatically increased.

The second reason hints at a structural flaw. The US has a notoriously elaborate system of tax breaks and deductions. The average large corporation pays an effective tax rate of 22%, not 35%. Remember, this rate is only the average; in reality, tax breaks tend to favor some corporations and penalize others. The Energy Sector, for example, receives disparately more tax breaks due to intensive lobbying.

The problem costs the US heavily. The Institute on Taxation and Economic Policy, a left-leaning think tank, found that nearly 40% of Fortune 500 companies have paid no taxes in at least one year between 2008 and 2015. An abridged list includes AT&T ($38.1 billion avoided in the last eight years), Wells Fargo ($31.4 billion), JPMorgan Chase ($22.2 billion), Verizon ($21.1 billion), and IBM ($17.8 billion). Eighteen multinationals, including General Electric, actually paid negative taxes — that is, they received rebates. These slanted tax breaks cost the US Treasury some $154 billion a year.

The current plan to cut the corporate tax to 20%, then, may not be that dramatic a cut from reality. Its simplification of slanted tax breaks would actually more heavily tax the largest corporations. In the words of Tara DiJulio, a spokesperson for General Electric, “The tax code is complex and outdated, which is exactly why tax reform must happen this year. G.E. has long been advocating to simplify and modernize the tax system — even if it means we pay more in taxes.”

The third reason most urgently calls for corporate tax reform. The federal government taxes the largest companies, multinationals, on both domestic and foreign profits. But there’s a loophole — international profits are only taxed once they enter the US. Multinationals frequently abuse the system by keeping their profits offshore, thereby avoiding any tax on a large chunk of their profits. The list of perpetrators is long: Apple, Microsoft, and Coca-Cola are oft-cited cases.

So how does the current Tax Cuts and Jobs Act deal with this? It doesn’t explicitly. The hope is, however, that lowering the tax rate to 20% would incentivize multinationals to bring their profits back home. And perhaps that’s the most we can do—so we should do it. In the words of Senator Bernie Sanders, “the truth is that we have a rigged tax code that has essentially legalized tax dodging for large corporations. Offshore tax haven abuse has become so absurd that one five-story office building in the Cayman Islands is now the ‘home’ to more than 18,000 corporations.”

That’s not to say the Tax Cuts and Jobs Act is perfect. If anything, its changes to individual tax cuts may result in a destabilizing $81 billion reduction over the next ten years. Yet the story behind the corporate tax rate slash appears to have more substance.

Corporate tax reform is urgently needed to fix a complex system littered with loopholes. Even if the rest of the tax bill is up for heavy debate, its core may be a step in the right direction.

Irena is a senior this year with interests in CS, gelato, and kdramas. Actually, put kdramas in there 2x.

Be the first to comment on "Understanding the Corporate Tax Cut"