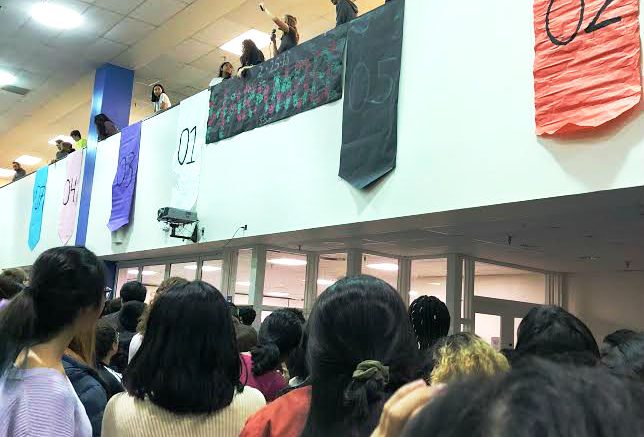 Every year, the Clash Color Reveal kicks off the preparation period for IMSA’s most popular student competition – Clash of the Halls. Though CoTH does not begin until March, students were not lacking in hall spirit at Color Reveal last Tuesday. Members from each of the seven halls poured into the Old Cafe, chanting, blasting music, and (perhaps most creatively) blowing a conch seashell. In a dramatic reveal using balloons and posters, the colors for each hall were revealed as it follows:

Afterwards, several students voiced their surprise on the return of black and white. In last year’s competition, the hall receiving white as their color made ‘fake meme themes’ referencing the KKK and white supremacy, which sparked controversy on the limits of free speech.

“We decided to leave it up to the people; that was the point of the poll,” explained Campus Activity Board (CAB) senior member, Kate Rabideau (’18), regarding the decision to bring back the colors. “We wanted to make sure that the campus was comfortable with having black and white but also give them a chance to replace it if they weren’t.”

However, last year’s events have not been completely disregarded. CAB has clearly established that the ban on fake meme themes will be strictly enforced, and the policy has been stated in the rule book multiple times.

Daniel Chen (’19), a junior member of CAB, thinks the last year’s controversy has inspired CAB to provide a better Clash. “We’ve been working even harder this year than other years, especially our director, Diego,” he says. “With so many unanswered questions after the unfortunate events last year, we’ve been trying our absolute hardest to make sure that this year’s Clash will not only be unique, but also inclusive and safe.”

CAB is looking forward to reaping the rewards of their hard work in the following months. Among the talent shows, dress up days, and other events in Clash, Chen says, “I’m personally looking forward to seeing drill the most, since I think the halls this year have very equal distributions of both talent and participation.” Rabideau also adds, “CAB has some fun new stuff, like Mario Kart, cooked up for this year!”

As a resident of 1506, Rabideau is also confident that her hall will rise from their 6th place ranking from last year, but the current champion for Clash, 1504, is not looking to step down from their title. Sam Anozie (’19), a resident of 04, feels the pressure of winning the competition, especially as a student who lived in a different hall last year.

“For people coming from other halls and for the sophomores, it’s more about living up to and surpassing what has been done before you,” he says.

“Winning is never guaranteed, but ’04 has just as much talent and drive as it did last year,” adds his roommate, Suchet Kumar (’19). “There are some really great people who move to the hall, and even if they weren’t previously ’04, they become ’04. Most of them adopt the brotherhood and passion that ’04 is known for.”

Ultimately, Clash exists to bring members of a community together. Unlike students from a regular public school, who may only interact casually in academic-related circumstances, students from different halls will tirelessly plan, work, and dance towards their shared dream of winning. Rabideau hopes people are excited about the 2018 competition. “At least for me, Clash time is when I spend the most time with my hall and getting to meet new people that I wouldn’t have had the excuse to get to know,” she says.

Be the first to comment on "COTH Color Reveal: The Return of Black & White"