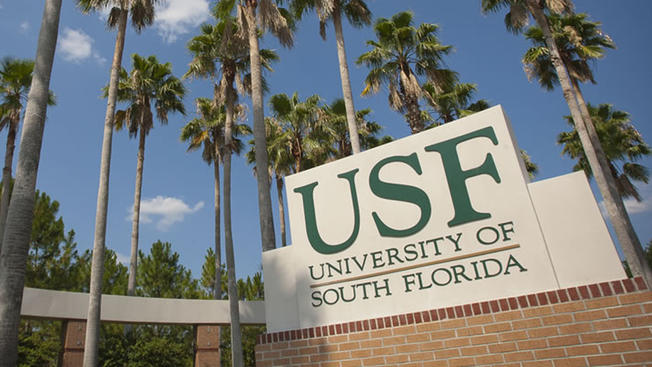 I spent the last five days touring colleges in Florida, and it was awesome.

The University of South Florida (USF) offers a “Scholar’s Experience” to their National Merit Semifinalist applicants, wherein they pay for your flight to Tampa to tour their campus, plus a one-night hotel stay. 2020 Semifinalists, take note.

And yes, a parent can come too — the flight and hotel are for two people. Whether that’s a good thing or a bad thing…well, that’s up to you.

The average Scholar’s Experience is 4 hours. Mine was a solid 7.5 hours because I wanted to visit so many places. I met with the Dean of Admissions, the colleges of business and engineering, Education Abroad, and the honors college.

So, why the University of South Florida, you ask? Why a state university, especially given IMSA’s Ivy League enrollment track record?

The state of Florida wants to attract out-of-state National Merit Scholars — so much so that they established a program known as the Benacquisto Scholarship. This scholarship is automatically awarded to any National Merit Finalist who designates a Florida state university as their first choice with the National Merit Corporation by a given deadline (May 31, 2020, for this year). That includes the following eight schools:

The University of South Florida gives you an additional $5,000 stipend per year, which means even more spending money. Hence…

Throughout my Scholar’s Experience, I was struck by how friendly everyone was and how much they genuinely wanted me at USF.

That seems like a pretty “no, duh” statement until you consider how most college tours work. Of course, they’re trying to market the school, but their goal is usually to convince you to apply. Since there are a limited number of seats in each class, a bigger applicant pool will make the school look more selective. At the time of my visit, I’d already applied to USF but hadn’t been accepted. In that context, a tour guide generally doesn’t say, “We’d love to have you here!” as if you’re already admitted. But that’s pretty much what my USF tour guides did for me.

I arrived at USF a little early, so I was prepared to wait for my tour coordinator to arrive. But I hadn’t been sitting in the lobby for more than two minutes before the Dean of Admissions came out of his office, confirmed that I was the National Merit Semifinalist visiting that day, and invited me and my dad in to talk. He asked where I was from, what my intended major was, what sparked my interest in USF (“The weather,” I said).

USF rolled out the red carpet even more that Saturday at their National Merit Scholar Semifinalist dinner — which, as the name suggests, is to allow Semifinalists to see what USF is all about. They discussed the full-ride + $5,000 scholarship package they offered to National Merit Finalists who attended their school and encouraged us to attend.

This is in contrast to prestigious schools, where National Merit Semifinalist applicants (and high-achieving students in general) are basically a dime a dozen. Well-known schools don’t have to try as hard to get students to apply, because they’re confident that the students will come to them. At schools like USF, it’s the opposite — they’re “courting” you instead of the other way around. It’s a refreshing change of pace.

These colleges are like sports recruiters, but for academics instead.

REASON #2: THEY ACTUALLY WANT YOU AT THEIR SCHOOLS.

“But what about the prestige?” you ask. “Harvard might cost $80k a year and USF might give me a full ride, but isn’t it still worth attending Harvard for the name?”

Many IMSA students use state universities as their safety schools, so people view them as lesser schools. But state schools are far from being “bad” colleges — the University of Florida is the #7 public university in the nation; U of South Florida #44; and U of Central Florida #79.

In fact, given the number of prospective medical students (as Mara Adams put it, the number of “pre-pre-med students”) at IMSA, the money that you put into an undergraduate degree at MIT could be better spent on medical school, law school, or even graduate school.

REASON #3: YOU CAN GO TO A PRESTIGIOUS SCHOOL — BUT SAVE THE BIG MONEY FOR MEDICAL/LAW/GRADUATE SCHOOL.

I was initially turned off from huge public universities because one of my friends enrolled at UIC but dropped out after the first week. She explained that she felt like “just a number,” because she attended classes in huge lecture halls, was taught by TAs instead of professors, and had no support whatsoever.

But most state universities have honors colleges — USF’s is called the Judy Genshaft Honors College, after their former president. These colleges are open to high-achieving students in general, not just National Merit Scholars. Every student in the honors college has a designated honors adviser and gets priority course registration, and all honors classes are limited to 20 people or less. Also, USF assigns one of its eleven honors college advisers to work exclusively with National Merit Scholars for even more individualized attention.

REASON #4: AS A HIGH-ACHIEVING STUDENT, YOU WON’T BE “JUST A NUMBER.”

I’ll conclude with this.

Although I used the University of South Florida as a case study here, most of the things I’ve mentioned apply to many other state universities as well. They offer scholarship money, individualized support, and special honors classes to high-achieving students — like IMSA students.

Sophomore Navigation taught us that one-sided relationships are unhealthy — pick a college that reciprocates your affection, rather than flaunting their own prestige.

Why Some Are Against Going to College

Be the first to comment on "Why Florida? My USF Scholar’s Experience"