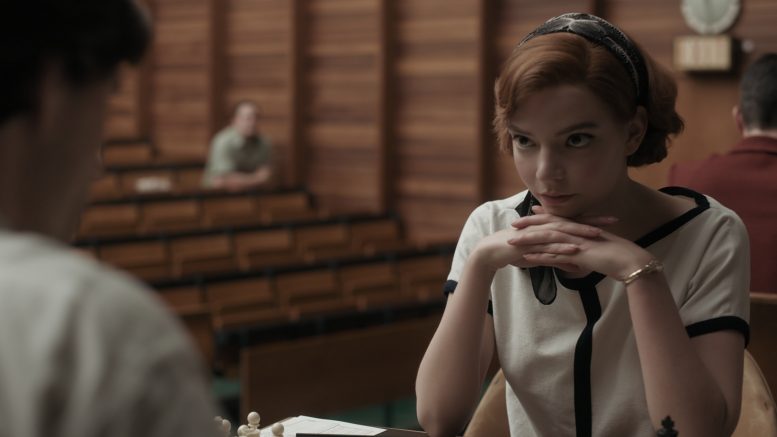 The Queen’s Gambit (2020), a limited series on Netflix has taken the world of television by storm. The 7-episode show follows Beth Harmon, a child chess prodigy. The series was released on October 23rd, 2020, and it soon became the most watched series on Netflix by October 28th, 2020. Now what might explain the startling success of this seemingly boring chess story? The answer lies in the viewer’s fascination with geniuses.

The first episode focuses on Beth’s discovery of chess. In a girl’s home, she witnesses the janitor playing chess by himself in the basement. She becomes curious and eventually begins to play with him. She’s obviously a natural and begins to advance her skills, playing against a high school chess team. As a teenager, later in the series, she is adopted and begins to enter many chess tournaments. She meets some challenges along the way, including sexism and a lack of professional experience, but eventually we see the protagonist prevail.

What’s so captivating about this show is all of the chess matches are 100% real and performed by the actors themselves. Chess grandmaster Garry Kasparaov, considered one of the best chess players in the world, and coach Bruce Pandolfini designed every game shown in the film. The lead actress, Anya Taylor-Jo, describes learning chess as learning a dance, stating, “Essentially I learned all of the sequences like dances and because I’m a dancer … that was helpful in terms of remembering how everything worked out.” Capturing so many viewers is the skillfulness and authenticity of these chess matches. Viewers are naturally mesmerized by Beth’s proficiency at the art of chess.

The Queen’s Gambit is surely not the first cinematic piece to baffle an audience with a character’s intelligence. A Beautiful Mind (2002) tells the story of John Forbes Nash, a mathematician who won the Nobel Prize, The Imitation Game (2004) focuses on a genius who decrypted German code for the British government, and the popular Sherlock Holmes franchise tells the story of the cunning detective. All of these films work to invoke a sense of astonishment in the audience, wowing them with the character’s brilliance. Similarly, Beth Harmon has captured so many hearts due to her brilliance in chess.

Be the first to comment on "The Queen’s Gambit: Geniuses in Film"