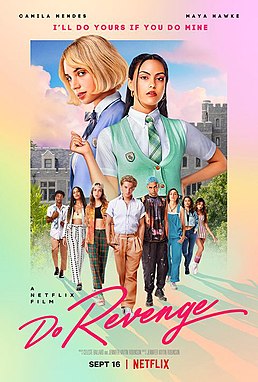 Nearing the end of Summer 2022, Netflix released an original coming-of-age movie titled Do Revenge. Many people were excited or interested to watch this movie because of its A-list cast featuring stars from popular teen series such as Riverdale, Stranger Things, Euphoria, Outer Banks, 13 Reasons Why, and Pretty Little Liars: Original Sin. Warning: this article will be discussing spoilers.

In Do Revenge, we follow two main characters: Drea and Eleanor. Despite being total opposites, Drea and Eleanor develop a friendship rooted in revenge. In the beginning, Drea and Eleanor meet at a summer tennis camp and bond over their previous hardships: the former queen bee, Drea, was dethroned by her school when she was betrayed by her ex-boyfriend, Max, who allegedly released private and intimate videos of her, and Eleanor is still haunted by a cruel rumor spread by her ex-girlfriend, Carissa, about her a few years ago from summer camp.

When their senior year begins, Drea utilizes what they have in common—bad blood with a classmate at their school—and proposes the idea of doing each other’s revenge. Eleanor would expose Max (Drea’s ex) and Drea would take down Carissa (Eleanor’s ex). While it was easier for Drea to take down Carissa by exposing Carissa’s secret to the superintendent, Eleanor and Drea struggled to take down Max. In the process of their attempt to take him down, their friendship began to crumble as Drea began to be frustrated with Eleanor.

What stood out to me from this movie was its cinematography and characters. I admired the bright colors used throughout the film’s sets and costuming because it created an aesthetic for the school to seem perfect and proper. However, as we learn more about the characters, we discover the irony in their appearance as many of the characters are deeply flawed. But, it is their flaws that make the movie interesting and engaging for the viewers. Max’s character is the epitome of a privileged performative activist, and I loved how the writers emphasized this through his creating the “Cis Hetero Men Championing Women Identifying Students League.”

Additionally, the main characters, Drea and Eleanor, both have been wronged and wronged by others. I loved the plot twist that completed a clear image of their characters, where Drea was revealed to be the one spreading the rumor about Eleanor, influencing Eleanor to ruin Drea’s life. Both were in the wrong for the actions they did to each other, so I admired how they were able to admit their mistakes and develop a meaningful relationship.

The plot and characters of Do Revenge make a memorable and relatable coming-of-age experience for teens to enjoy! The cast is amazing, however, I do acknowledge that it would’ve been better to see a representation of actual teenage newcomer actors.

Film Review: The Perks of Being a Wallflower

Be the first to comment on "Do Revenge Film Review"