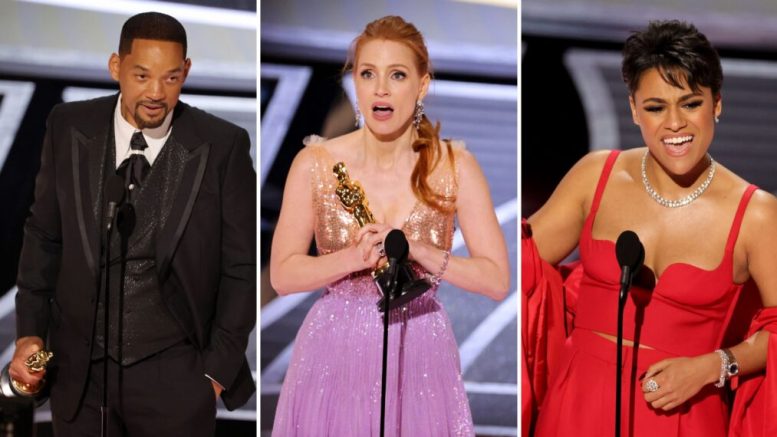 Every few years, the Oscars become memorable because of a shocking moment. Jennifer Lawrence tripped going up the stairs in 2013 and the Moonlight-La La Land mixup is often connected to the 2017 Oscars. Most evidently, the 2022 Oscars will be most remembered by Will Smith slapping Chris Rock. However, many performers and winners made history at this year’s Oscars, even though there were overshadowed by the slap. Hoping to shine a light on the incredible winners and acts, here is a list of everything that is important to recognize about the 2022 Oscars.

1. Megan Thee Stallion becomes the first female rapper to perform at the Oscars.

Megan Thee Stallion made a surprise appearance and performed a mashup of the song “We Don’t Talk About Bruno” from Encanto, which also won an academy award later in the night. Megan celebrated her performance on Twitter, “I literally was just in Puerto Rico less than 24 hrs ago performing, my dress had just came in last night from India, and that was thee FIRST FEMALE RAP PERFORMANCE at the OSCARS ever!”

The Oscars has gone three years without a host. This year, Amy Schumer, Regina Hall, and Wanda Sykes hosted the show. This is the first time female comedians have hosted the Oscars. Amy poked fun at the gender pay disparity in their introductory monologue, suggesting that the academy “hired three women to host because it’s cheaper than hiring one man.”

The Oscars was a big night for CODA, which stands for child of deaf adults, is a remake of a French film called La Famille Bélier. The film became the first movie from a streamer to win an Oscar for Best Picture.

Siân Héder, the writer-director of CODA, won the Oscar for Best Adapted Screenplay, becoming the first woman to do so since Emma Thompson won for Sense and Sensibility in 1995.

Troy Kostur won the Academy Award for Actor in a Supporting Role for his role as Frank Rossi in CODA, making him the first deaf male actor to win the award. Marlee Matlin, also in CODA, is the only other deaf actor to win this award in 1987.

4. Ariana DeBose became the first openly queer woman to win an academy award for acting. She is also the second Latina to win the award.

Ariana DeBose made history at the Oscars for Best Supporting Actress for her performance as Anita in Steven Spielberg’s West Side Story. Ariana follows in the footsteps of Rita Moreno, who received the prize 60 years ago for the same role.

“Imagine this little girl in the backseat of a white Ford Focus. Look into her eyes, you see an openly queer woman of color, an Afro-Latina, who found her strength in life through art,” Ariana stated in her speech. “So to anyone who has ever questioned their identity ever…I promise you this, there is indeed a place for us.”

5. Jane Campion won Best Director, meaning a woman has won this category for two years in a row.

At the 2021 Oscars, Chloe Zhao took home Best Director for her film Nomadland and became only the second woman to do so. Jane Campion has become the third female winner for her movie The Power of the Dog.

After narrowly losing Best Actor last year, Riz Ahmed won Best Live-Action Short Film this year for The Long Goodbye, which he co-wrote and starred in. The short film explores his identity as a British-Pakistani artist and includes music from his 2021 album of the same name.

For her portrayal of Tammy Faye Bakker in the biography The Eyes of Tammy Faye, the actor was named Best Actress. Tammy Faye and Jim Bakker’s (Andrew Garfield) troubled marriage is explored in the film, as she devotes her life to assisting the LGBTQ+ community.

She alludes to the “Don’t Say Gay” bill that was passed in Florida, stating, “We’re faced with discriminatory and bigoted legislation that is sweeping our country with the only goal of further dividing us. There’s violence and hate crimes being perpetuated on innocent civilians all over the world. And in times like this, I think of Tammy and I’m inspired by her radical acts of love.”

With the drama that ensued at this year’s Oscars, it is important to recognize the history being made for women, minorities, and the LGBTQ+ community. Although Chris Rock and Will Smith may have brought more attention to the award show, let’s not forget the winners and performers of this year’s Oscars.

Be the first to comment on "The 2022 Oscars: Recognizing Overshadowed Moments"